QRcodes: PHP based QRcodes in the cloud

Following on from my Javascript based QRcodes in the cloud here

The same guy who wrote the javascript engine also has a PHP based generator released under the MIT license. The php code can be found here

So, with the help of phpform.org I have created my very own webpage on my very own free Amazon micro cloud. 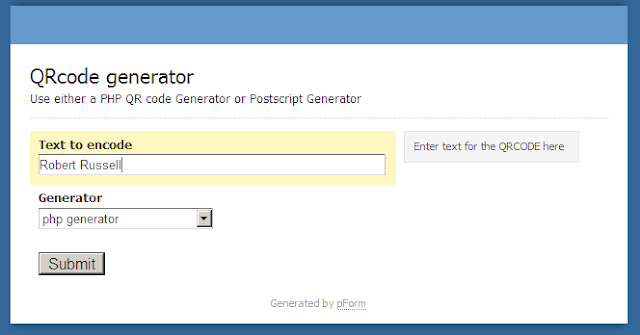 As you may be able to tell I have further plans to use php and create a bigger and better site.

I then manually changed the submit action in form.html to call the adapted example qrcode php code.

Here is the adapted php code to generate the qrcode from the text in the form.

And I added some google ads to the code and it looks like this.

Below is the live Amazon EC2 page. link here

Its my test Amazon server so the server may be shut down at any time.

Posted by Robert Russell at 1:06 AM No comments:

QRcodes: Javascript based QRcodes in the cloud and an SAP BSP

Due to my involvement with the SAP mobile tagging wiki page.

I came accross the javascript based QRcode generator here.
The files to create QRcodes with Javascript can be downloaded from the above link.

Only related to the cloud as I use my own free Amazon EC2 micro instance.

As I have access to my free Amazon micro instance in the cloud again, I put up the following simple webpage to generate a QRcode based on values in the URL. The following takes the parameter out of the URL and cuts the string after the 3rd character. Its my choice and there may be better ways of getting parameters with Javascript. If you know let me know :)


So a URL http://barcode.dyndns-web.com/qrcode.html?q=robert russell  would result in the following 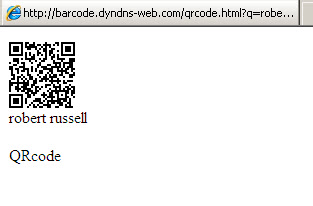 The Javascript that creates the QRcode - qrcode.js and sample.js are uploaded to the same directory as the following webpage.

Create a BSP (I called my BSP ZJQR) and upload the qrcode.js and sample.js to the MIME repository. Create a page called qr.htm as shown in the following screen shot. The "Q" page attribute needs the auto flag to be set 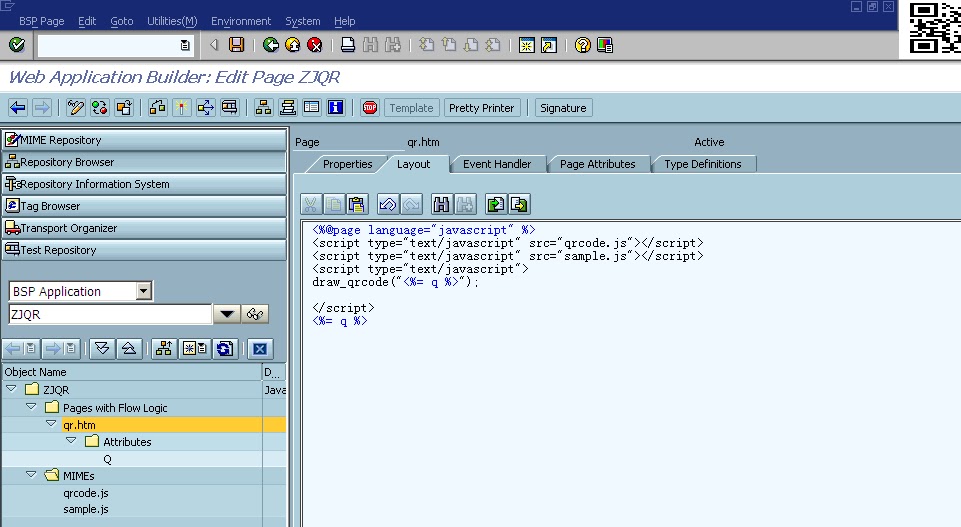 Posted by Robert Russell at 10:41 PM No comments:

This following is an example using transport logs although any transaction could be used with the right key words in livetext.

Screen shot of what I mean if you are not familiar with livetext. Note the blue underlined text in the email (the transport number) and the next tab is the log of the transport. 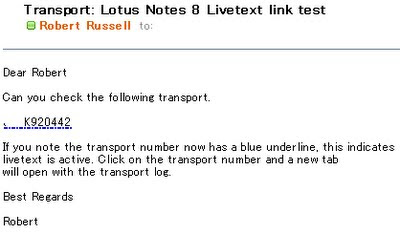 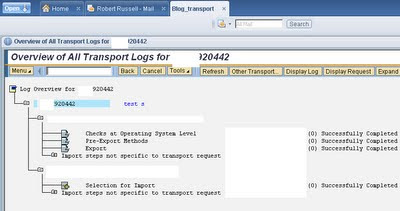 As the user is logged onto the HTML webgui then further actions/transactions can be performed.
SAP BSP Setup 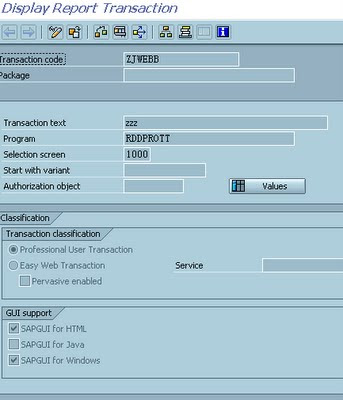 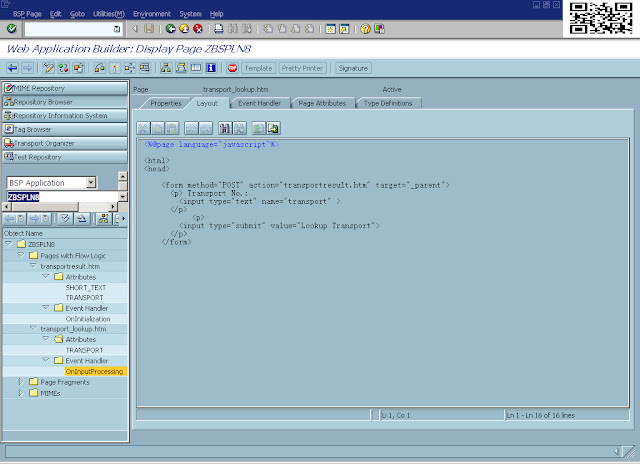 Layout   Simple form to use with livetext


OnInputProcessing  set the transport number to pass to the results page.


Transportresult.htm  used to redirect to the HTML webgui

Layout This is only used for trouble shooting to display passed parameters. It can be ignored.


Change the F.Q.D.N and  {port} to the correct values for the installation.

"short_text" was used for testing and also the SQL in the OnInitialization using this attribute can be ignored.

SICF Changes to BSP Service  allow system logon page for the BSP and not the standard popup logon. 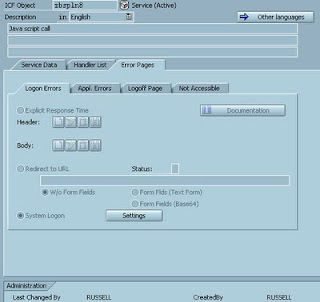 Select "System Logon" and save the change. This allows the livetext widget to use the logon page.

Test to confirm the BSP is working by entering a transport number into the transport_lookup page.

Select the getting started with widgets icon

Select Web Page and Next 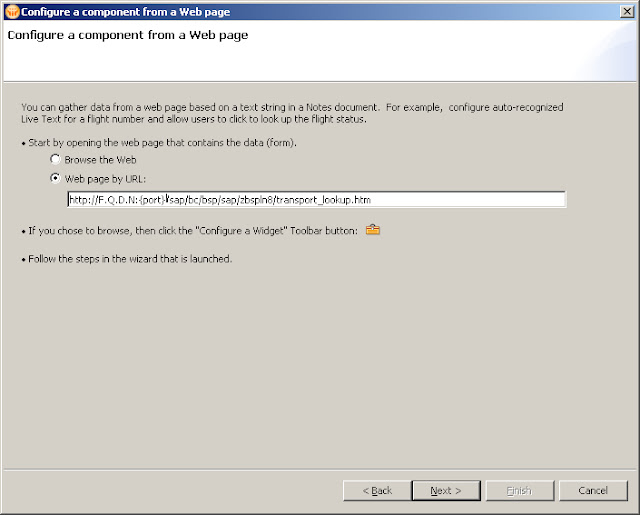 Select "1" on the form and DO NOT change the default user and password and select Next. The user Lotus and password IBM are used by the livetext widget. The actual logon credentials come next. 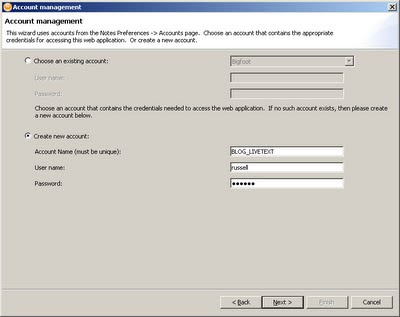 Select Next do not enter anything on this page as it is just a confirmation that the logon to the SAP server was successful. 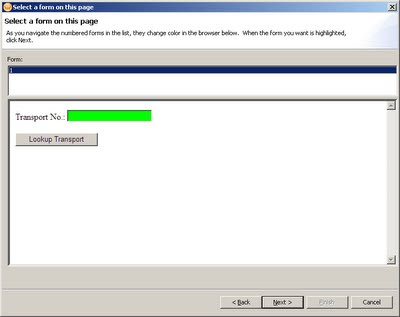 Select "1" on the form and select Next 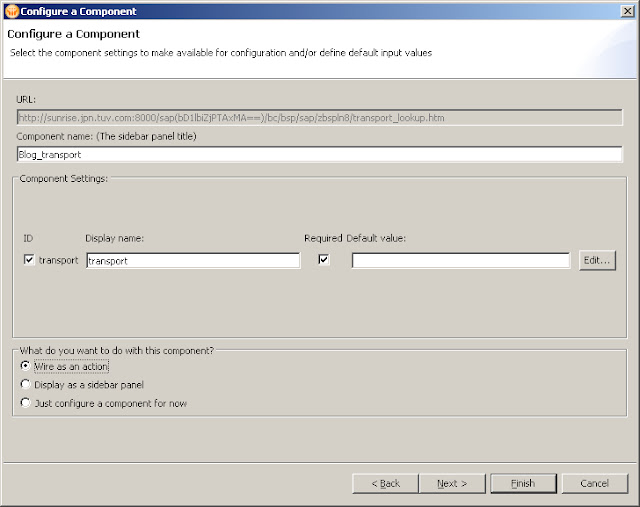 Enter a component name and select "wire as an action". Select the "transport"﻿ ID from the BSP form and select Next. 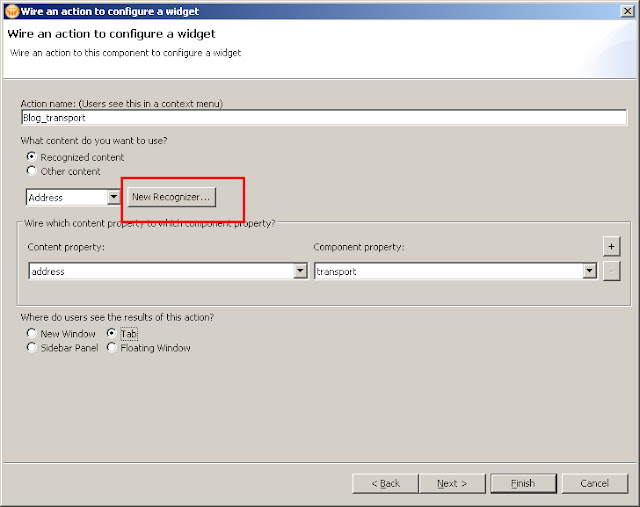 Select Tab to display the results. Click on the "new recognizer" 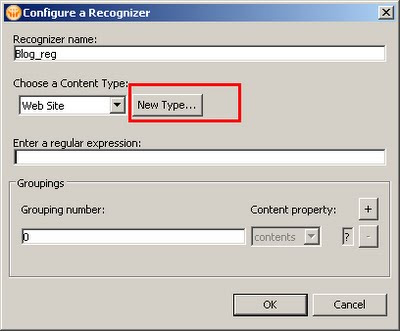 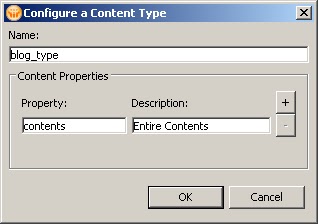 ﻿Enter the Name for the new content type and hit OK 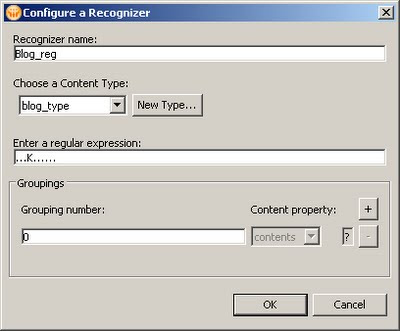 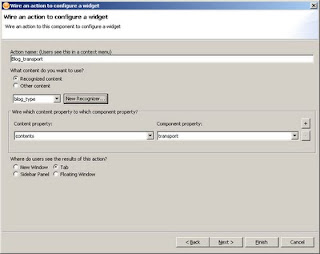 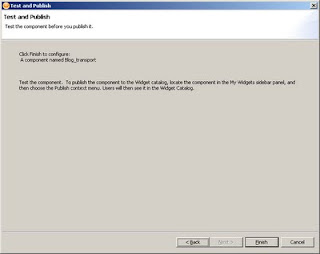 Select Next and Finish to complete the livetext widget.
So now if the livetext feature is active in Lotus Notes, all emails containing a transport number should have a blue underline indicating that the transport logs can be viewed by clicking on the transport number. As shown earlier. As this example is based on transports the server created for the BSP is the
The live text activation can be found in the preferences for Notes. 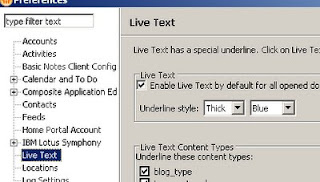 Posted by Robert Russell at 5:03 PM No comments:

SAP: Squeezing the world (google earth) into SAPGUI for Windows

Inspired by the thematic mapping engine in presenting data in KML, this time I cover scalable icons in KML with the google earth api plugin and also geocoding custumer postcodes then calling Google Earth via a browser function call.

The video will change later as I am stuck with Windows Movie Maker as my MAC is back in Japan.

Posted by Robert Russell at 12:45 AM No comments:

The following demo is based on the ERP system that is part of the SAP Enterprise Services Workplace.
The ES workplace website can be found here
You need to register to get a logon account.

When you logon to the ERP system you are in the world of SAP, apart from ALV grids (maybe some other parts) which allows the IE8 accelerators when text is selected.

Using this method you can link transactions, so selecting some text will allow an URL to be constructed to start another transaction.

Onto the demo, using VA05N "sold to party" number to link to VD03 display customer transaction. Demonstrating a way to quickly display the customer name instead of just the number.

Selecting the the text in one row for the "Sold-to pt" will display the blue IE8 accelerator button. As shown below. 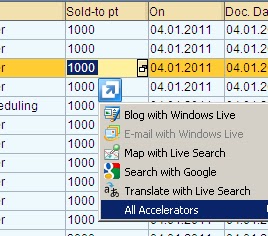 When selecting my accelerator this will use the transaction VD03  to display the customer. As shown below the customer is "Becker Berlin". The screen shot shows the preview screen, when clicking on the "SAP display customer" accelerator then the VD03 transaction will start in a new page. It does start a new session.

I have put this accelerator on my Amazon EC2 micro instance here.


The code/xml behind the accelerator is here....

Webpage for the button.


XML for the accelerator.

Posted by Robert Russell at 9:41 PM No comments:

Raw KML file available to download for free and to be used in any way is here.


As some of my previous blogs have pointed out I am interested in the thematic mapping concept and using these methods in SAP and other applications with KML.

The blog above covers the "simple transformation" of data into a KML file. I used the Natural Earth datasets as a base to generate the KML for SAP.

I did have intentions to cover the method I used to generate the KML earlier but have been delayed by my work related activities and the fact I am not currently at my home in Japan.

However I have gone through the details now and here is ONE way to generate KML from the Natural Earth Datasets. (How to use this KML in SAP will follow in another blog)

*As another blog entry pointed out there are Google fusion tables generated over at the thematic mapping engine available online. When I commented on Mr Sandvik's blog he pointed out that the datasets can be used but also google terms of use are also referred to. I do not like reading google's "terms of use" for other services as it always  dissapoints me when commercial aspects are not allowed. I have not read fusion tables terms of use in detail. However reading that the Natural Earth datasets are public domain and can be used for any purpose, I detail below the method I used to generate KML by prefecture for Japan.

Also to point out if you want online community access to geographic data and maps then the geocommons website is well worth a visit. I found lots of data related to Japan (and prefectures) that could be used, however commercial aspects are restricted.
Geocommons link searching for Japan prefectures.
http://geocommons.com/search?mh_query=japan+prefectures

So the intention with the blog is to show a way to get KML that can be used for ANY purpose.

KML from the Natural Earth Datasets.

Summary of the software/data used.

*) Natural Earth datasets from the 10m cultural download section
The shapefile used to generate the KML by prefecture of Japan is from the Admin 1 section shown below.

The QGIS software is used to extract the Japan prefectures from the Natural Earth shapefile
Download here http://www.qgis.org/wiki/Download

I have QGIS installed locally on my desktop.

*) Excel or Open Office spreadsheet.
Excel is used to modify the dbf file from the shapefile downloaded from Natural Earth. The data in the shapefile relates to FIPS standard notation where I add the ISO related data from wikipedia for the prefectures of Japan.
I used this link to cross reference the data to the wikipedia page http://www.statoids.com/ujp.html

The Geoserver is used to generate the KML from the modified shapefile.
Download here http://geoserver.org/display/GEOS/Download

I have an instance of Geoserver running in the cloud on an free micro instance from Amazon.
Here is my EC2 instance showing the Japan prefectures with openlayers.
As its a test server I may stop it at some point and therefore it will not display.

First objective is to delete all data that is not related to Japan from the Natural Earth shapefile.
Open QGIS and take the menu options "Layer" -> "Add vector layer".
Select the "10m_admin_1_states_provinces_lakes_shp.shp" file downloaded earlier. 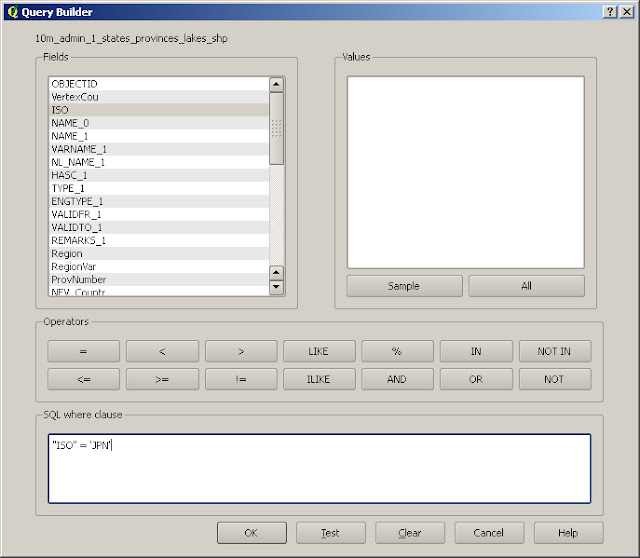 Attribute table will show the remaing data for Japan (or county of choice). 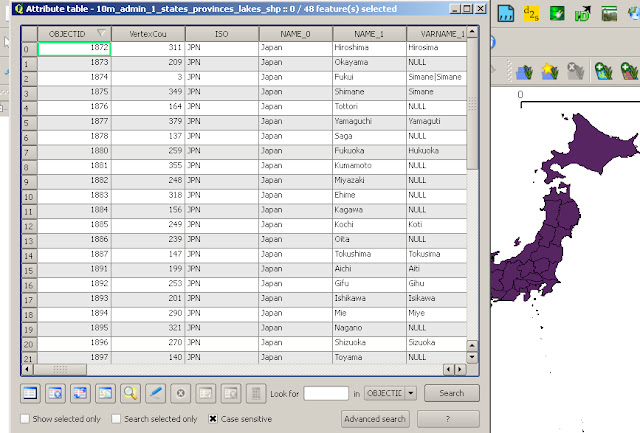 Save the changes to the shapefile
Merged Polygons

While editing the natural earth shapefile I came across a very small  polygon with only 3 vertices in the Shimane prefecture,
As this would not be seen in my use of the KML file I merged the features using QGIS's merge icon. Also I edited the merged data to match that of the Shimane prefecture, as shown below. 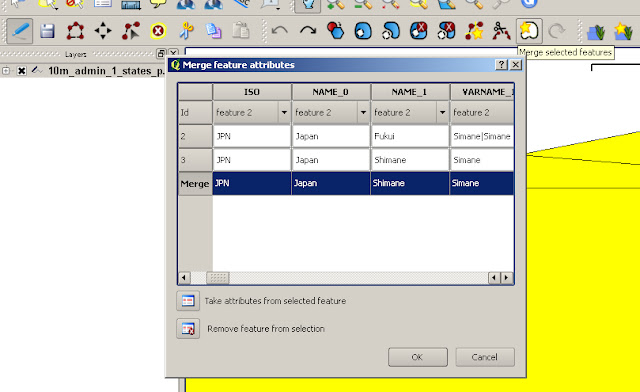 Save the project and save the results back to the shapefile. Answer yes to the prompt. 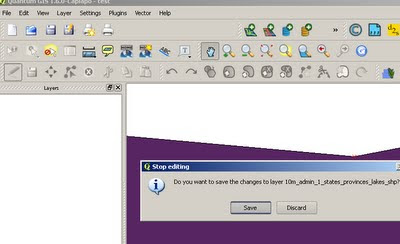 Once the Japan only shapefile has been created then the dbf file needs to be edited. (in this example I add the ISO codes for the prefectures but this step is optional).
Open "10m_admin_1_states_provinces_lakes_shp.dbf" with Excel/Open Office.

I removed all columns apart from the ones shown below. I added the ISOP_1 column for the Japanese ISO prefecture codes.

I noted the following while editing the natural earth shapefile data.


*the same procedure for all rows in the file.


Save this file in the SAME dbase format (*.dbf files).
Geoserver Process

Once the shapefile is ready then it needs to be converted into KML.

There is a Geoserver quickstart guide which covers the Natrual Earth datasets.
Follow this guide to import the edited shapefile into Geoserver
http://live.osgeo.org/en/quickstart/geoserver_quickstart.html

However as we only want Japan (or any country of choice) then the bounding box needs to be adapted for Japan only.

As per this screen shot 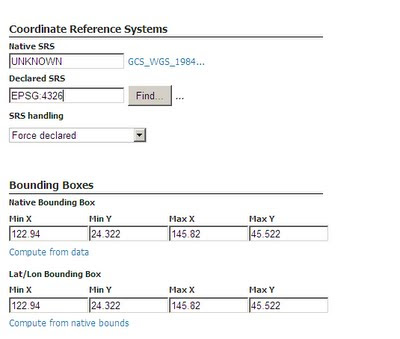 Google maps can read online KML files , so heres a screen shot of my Geoserver serving up the KML on Google maps. 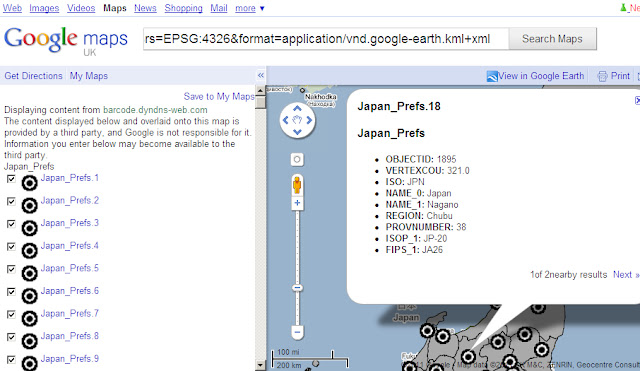 Here is a screenshot of the KML loaded into Google Earth 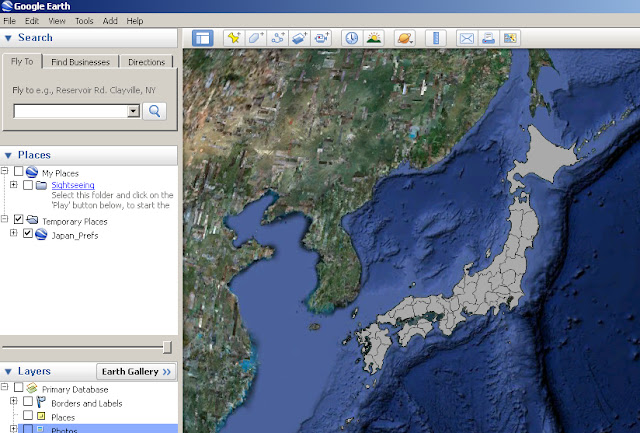 Posted by Robert Russell at 8:31 PM No comments: