Overview of technology used are listed below and I will be creating videos to cover some of the these topics.
If you are interested in any details from my video or information below then let me know via a comment on this blog. 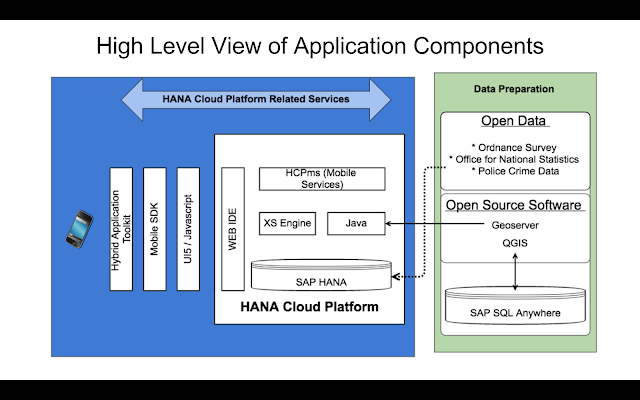 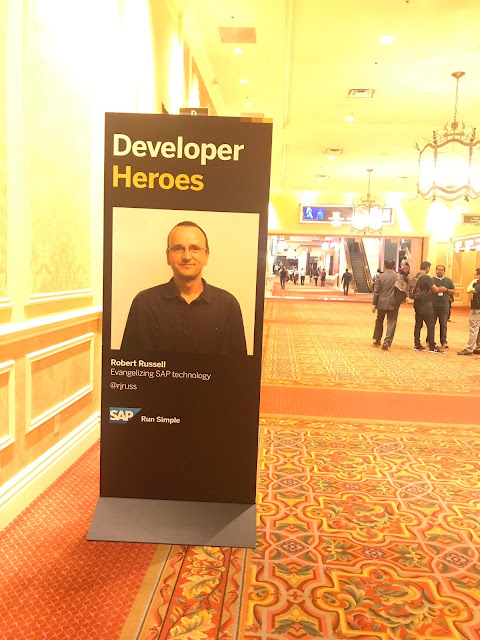 Posted by Robert Russell at 8:14 PM No comments:


With SQL Anywhere I was able to generate OAuth authentication but not in a format that twitter accepted and I had to use openssl to complete the process at the last step. In my opinion this was due to unclear documentation in the Twitter API help pages. Although I was able to work around it with SQL Anywhere calling openssl commands via xp_cmdshell system procedure at the last step for the binary format required. In my original blog I thanked Eric Farrar for his blog on SQL Anywhere’s hash capabilities and his blog was at this link but is now a 404 page cannot be found. Makes me wonder how many of my old blogs now contain dead links.
http://scn.sap.com/community/sybase-sql-anywhere/blog/2009/12/10/calculating-hash-based-message-authentication-codes-with-sql-anywhere


On a side note, I have previously used the  the “Way Back Machine” to find missing web pages. I visited https://archive.org/web/ entered the original URL and and the original URL for Eric’s blog was saved back in 2013 at this link


I didn’t want my main twitter account to be used to send out automated tweets - as in a worst case it may get out of control! I wanted to use a new dedicated account and set it up to tweet at my main account. I created an account call https://twitter.com/sqlany_rjruss and soon realised twitter had made some restrictions on API usage.


The API Setup required a phone number and I only have one number and this is locked against my main Twitter account. So I had to search for a workaround/solution. In the end I followed the information in this post to register my bot account sqlany_rjruss to link back to my main twitter account.
http://dghubble.com/blog/posts/twitter-app-write-access-and-bots/
Once I had my 4 tokens listed in a file called .twurlrc, as per Dalton’s blog link, I had a write enabled app. This meant I could proceed to setup my Java code to send out tweets.


I only used the core Jar file from the project


The following is the example code I used as I found the main examples on the twitter4J site seemed to follow a method to retrieve the access tokens each time. I chose to hard code the tokens in my code :).


I have tested Java 7 and 8 to compile the code with javac as part of the JDK I was using.
I tested the code on Windows 10 and Mac Yosemite and Sierra operating systems.


For my Mac’s I found I had to alter the path for the class path to get the tweets posted.
Usage: java -cp "tweet:.:twitter4j-core-4.0.4.jar" tweet "macbook pro"


SQL Anywhere can use Java as an external environment and a link to the help for SQL Anywhere 17 is here. One of my findings at the end of my setup was the difference between the Java environment returning a resultset or not. My example code does not return anything and only writes out.
http://dcx.sap.com/index.html#sqla170/en/html/8160578b6ce2101480bff9bdb43fee68.html


To capture errors while troubleshooting I found that starting SQL Anywhere and capturing log files was useful. E.g.


One example error below was triggered when I was testing with exactly the same tweet. To get around this I added a timestamp to all my tweets to make them unique!!


. 403:The request is understood, but it has been refused. An accompanying error message will explain why. This code is used when requests are being denied due to update limits (https://support.twitter.com/articles/15364-about-twitter-limits-update-api-dm-and-following).
message - Status is a duplicate.
code - 187


I found that the SQL Anywhere had a standard JAVAVM as part of the install on Windows 10. 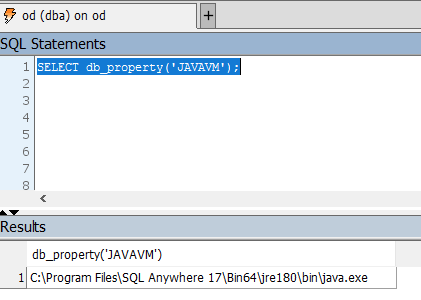 There is an Option to change the location of Java
ALTER EXTERNAL ENVIRONMENT JAVA
LOCATION 'c:\\jdk1.8.0\\jre\\bin\\java.exe';

I copied the code for Twitter4J into a dedicated directory. 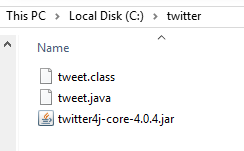 In SQL Central entered the Java external environment to import my class and the Twitter4J jar file. 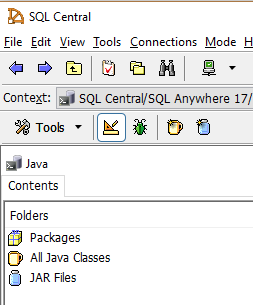 I followed the wizard to add my tweet.class

Followed the wizard to import the core Twitter4J jar file 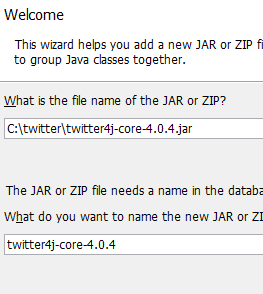 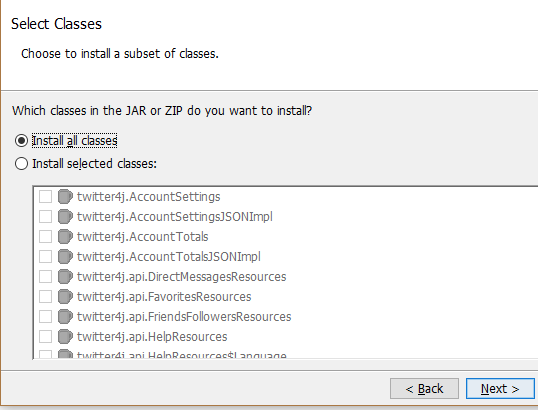 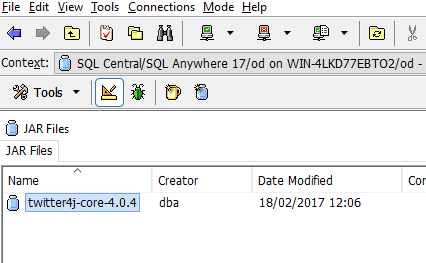 
I then tested calling the procedure from interactive SQL on my windows instance. 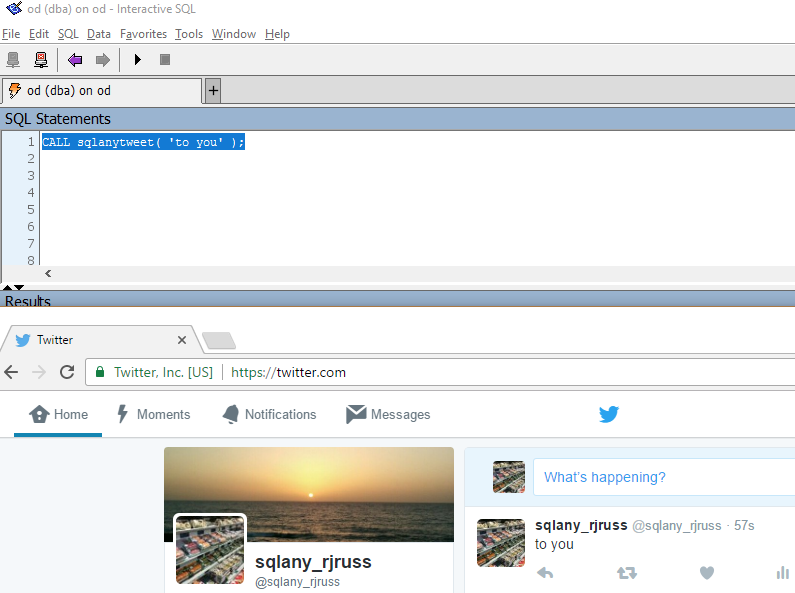 As mentioned earlier to prove to myself that this would work on other systems I setup my Mac version of SQL Anywhere to tweet using the same Java code, as shown below. 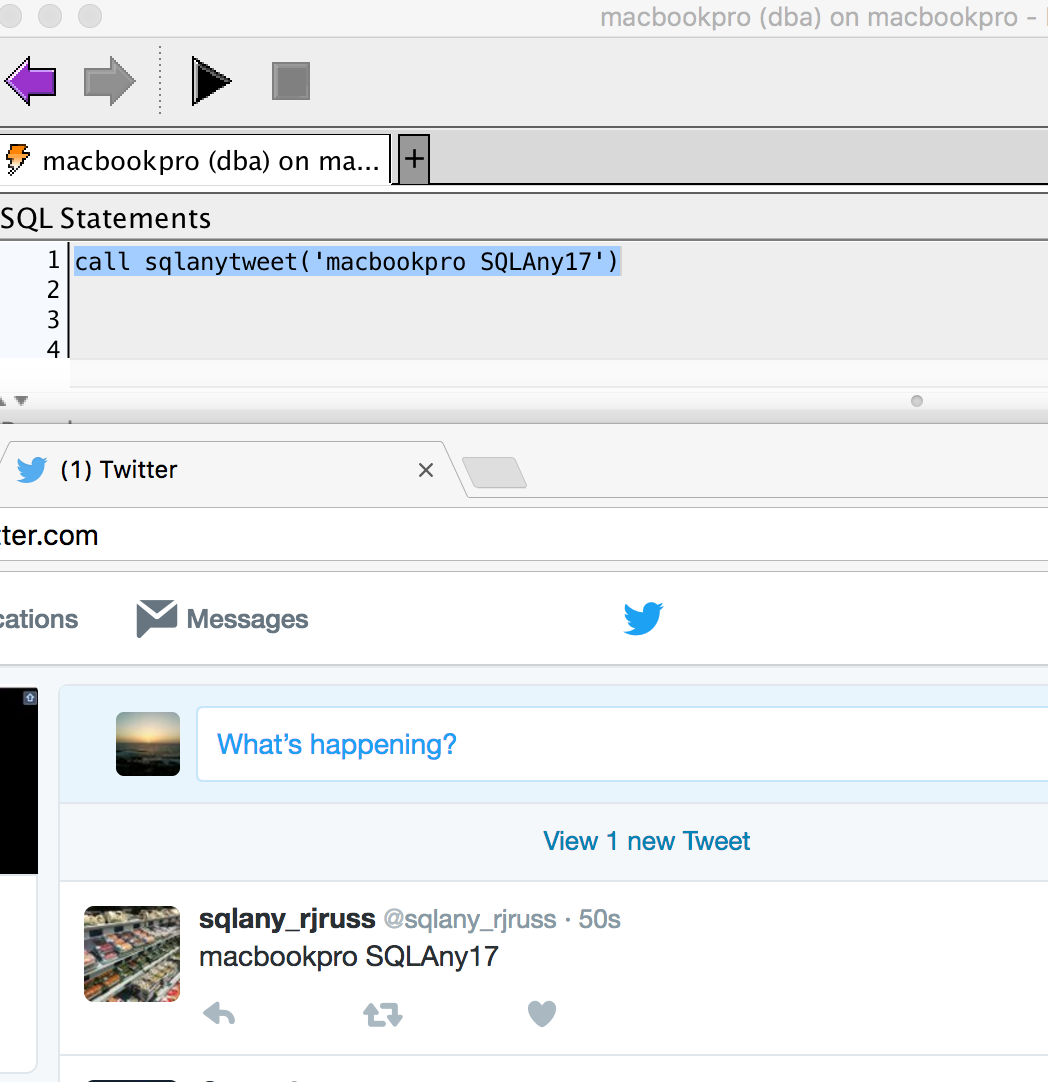 
Reading the Status.IO RSS feed for the SAP Cloud Platform

On the SAPCP’s page http://sapcp.statuspage.io/ there is a subscribe function which I used to get details about the RSS feed. I have no direct knowledge of how the feed is configured or updates triggered. So the following is all in theory for a demo as I have assumed how it will work and the following is based upon that guess work. I will split it into the following sections,

First I setup a table matching the RSS feed and adding one column to use to control how I tweet about any updates.

All columns matched an “item” in the RSS feed for the HCP status.io feed. Apart from the highlighted “tweeted” column which I will use to tweet any updates. I chose to use statusscp for the table name as the HANA Cloud Platform is now known as the SAP Cloud Platform (scp). I failed to keep this naming convention everywhere and still refer to HCP (some screen shots will have HCP but the real thing is now SCP) but then again it should be NEO.


As the status RSS feed is XML based and I am familiar with OpenXML features of SQL Anywhere then it is an ideal way for me to read the HCP status.io activity feed (and covered an OpenXML approach here as well)


First I downloaded the certificate from the RSS status page 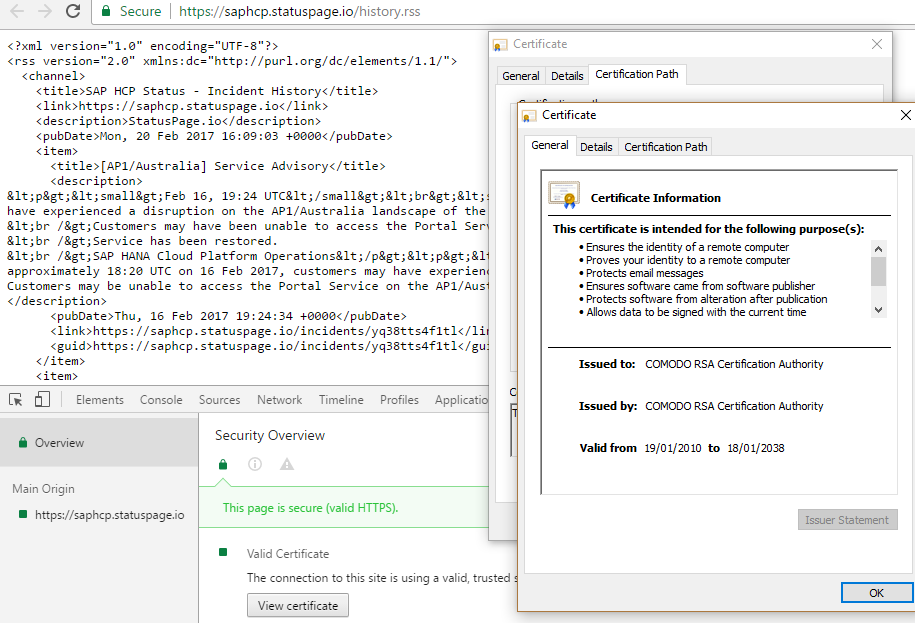 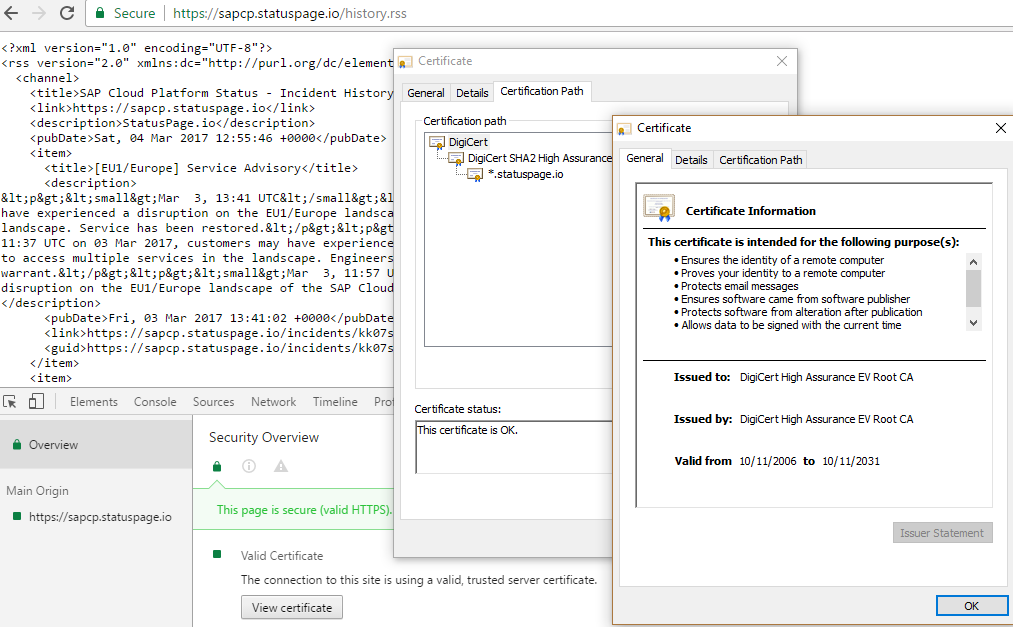 I saved the file into the twitter directory I created earlier as I will need to reference this in my openxml function,

Next I setup the function and procedure in SQL Anywhere that I will use to read the RSS feed (the function has the certificate reference).

It is unclear to me how many incidents are kept on the SAPCP status.io RSS feed however my approach was to setup a job to keep a table updated based on the published data pubDate field.

I setup the statusscp table in SQL Anywhere with a column “tweeted” which I would use to trigger and record actual tweets via my twitterbot.


Example  procedure of how I do this is below.


This line in bold is used to only tweet about Trial and Europe and All incidents. This way it will not tweet about US or other data centers which I have no interest ;).
SELECT title, "description" as de, pubDate, link FROM "dba"."statusscp" where tweeted is  null and ( title like '%Trial%' or title like '%Europe%' or title like '%All%')


This line in bold uses SQL Anywhere regular expression to search the RSS feed for a status text. It works on the understanding that SAP provide updates with Resolved, Identified and Investigating in this order. As I take advantage of the default behavious of REGEXP_SUBSTR to stop at the first match. If SAP or the status.io functionality make changes to these status messages then the code will no longer work as intended.
set WORDSEARCH = REGEXP_SUBSTR( de, '>Resolved<|>Identified<|>Investigating<' );


The final line in bold sends a formatted tweet at my main account via the sqlany_rjruss twitterbot. This uses the procedure I covered in my Twitter4J setup earlier.
select "dba"."sqlanytweet"( MSG );


I chose to control the process via a batch job on my windows 10 computer which would call an sql script. The sql would trigger the read of the RSS feed and send out any tweets as necessary, as per the following. 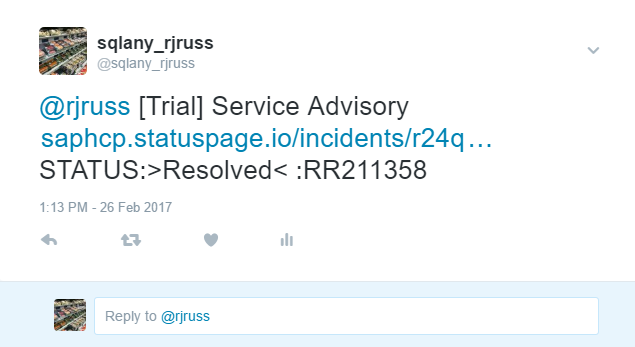 Posted by Robert Russell at 2:17 PM No comments: